Editor’s note: A recent reddit post — this one to be exact — really stuck with me. The author is an Irishman who’s looking to get into baseball and, not knowing where to start, he asked for help. Well, this week at Infield Fly, we aim to help everybody’s who’s just getting into the game. If you’re a new fan, if you’re interested in becoming a fan or if you know somebody who think would love the game and you want to point them our way, hopefully this week will have something for you. We plan to cover the how and the why for new fans.

Read the first instalment, a basic stats primer, here. The second instalment, a quick guide on how to get the most out of watching the game, is here. The third piece, a new fan’s perspective on why the game is great, can be found here.

Today an Infield Fly regular, Cole, looks at his experiences coaching and playing and shares what makes the game so special to him. Cole currently plays in the Southern New Brunswick Baseball League, a men’s wood bat league, and has coached in the New Brunswick Senior Baseball League, which has alumni such as former major leaguers Matt Stairs and Jason Dickson.

“Baseball is dull only to dull minds” – Red Barber

The above quote is one of my favourite and in my mind it rings quite true. A common knock against baseball is that it’s a boring game that lacks action. Of course, much like any sport, it can be and is boring at times — that I am quick to admit. However, I’ve always been of the mind that to truly enjoy baseball you have to possess, or develop, a “baseball mind.” Allow me to elaborate.

A pitcher gets set to deliver a 2-2 pitch. He takes time to settle in on the mound. He looks in for the signs, shakes one off. Finally nods, pauses and comes set, ready to deliver.

During that sequence, someone without a baseball mind is surely thinking something along the lines of “why is this taking so long? Hurry up and pitch.” Or, they are caught up by fans in the crowd doing the wave, or some other trivial distraction that has become the norm in a baseball game.

Someone watching this same stretch of 10 to 15 seconds with a baseball mind has a head full of questions and queries – Will he go back to the fastball even though the hitter fouled off the last one? Can he trust his catcher to block a curveball in the dirt if they try to get him fishing? Can they even afford to waste another pitch here, or will they go right after him? Are they going to start the runner on first? How much is the pitcher still thinking about the inside fastball this guy hit a homerun on three innings ago?

The pitcher-batter confrontation is one of the purest showdowns in all of professional sports. At it core, baseball is a team game, but the entirety of the game is a collection of one-on-one confrontations.

A pitcher stands 60 feet, 6 inches away from the hitter and is doing everything in his power to keep the offensive player off balance and guessing – to either make him swing through the baseball or to hit it weakly enough that his defense will be able to make the play behind him.

In that moment, there’s nothing team-related at all about baseball. You can’t pass the ball off to your teammate like in hockey or basketball, you can’t leave the batter’s box and be replaced by someone else like in soccer or football – once a hitter digs into that box, it’s man versus man, who is going to be better this time.

I put this time in italics because that’s even further beauty of baseball. You can have a Cy Young winner going up against a career .220 hitter and as long as that player has a bat in his hand, he’s got a shot. The results can often be shocking and unexpected in themselves, such as a pitcher hitting a homerun. Or they can be at-bats that stretch into marathons, a test of endurance that becomes a game inside a game.

Every move matters in baseball.

People often wait for runs or big plays to think there have been breaks in a game, but truthfully there are breaks in each and every pitch of a baseball game. It is infinitely easier to hit when ahead in the count than when behind, so every single pitch and every at bat is a mental chess match as the pitcher tries to figure out the best way to attack and the hitter tries to get inside the pitcher’s head and predict what he’s thinking.If you can’t learn to enjoy and appreciate the subtleties and nuances that make up the batter/hitter confrontation, you probably won’t be a fan of baseball.

As for myself, I’ve been able to develop my “baseball mind” not just by being a fan of the game and following the Jays but also by having participated in multiple aspects of baseball for years. Since the age of 10 (28 now) I have played baseball every summer except one, I umpired for three years as a teenager and I also have about 10 years of coaching experience, at every level from young kids to men.

I know there are many, many baseball fans who enjoy watching/following the game but have never played a single inning of competitive baseball, and that’s fine, but for me what fuels my love of baseball as a fan is my absolute passion as a baseball player, which brings me to my next topic.

I am an absolute sucker for baseball emotion. Like any sport, there are high tension moments in games and when those come to the surface in dramatic fashion there’s nothing greater or more moving in the world, in my opinion.

Let’s take an example. In the infamous 2003 ALCS, the Yankees rallied back from a 4-0 deficit to tie the game at 5-5 in the bottom of the 8th off of a tiring Pedro Martinez. The comeback was capped off by a two-RBI double by Jorge Posada.

Now, let’s keep in mind that I hate the Yankees with a fiery passion. While I now hate the Red Sox with that same vigour, back in 2003 they were still the loveable losers that were worth cheering for to unseat the perennial contending Yankees. 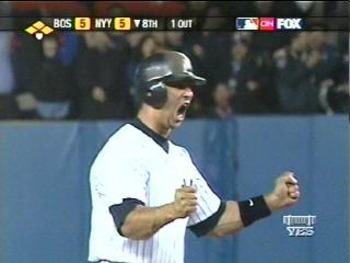 Despite that fact, this is quite simply an amazing baseball moment — Jorge Posada letting out a huge roar as he strolls uncontested into second base. 40,000+ New York fans coming completely unglued. The entire Yankee dugout emptying to celebrate the accomplishment. I am not exaggerating when I say I simply cannot watch that video without getting goosebumps and I am even getting them as I type this. If you can’t feel the baseball emotion in a play like that, you might not be alive.

Again, I hate the Yankees. I love baseball emotion, which was again on full display a few innings later as the Yankees wrapped up what was probably one of the best ALCS of all time – at least until the next year, perhaps.

Of course there are hundreds of examples of baseball emotion and they happen at all levels, from the kids playing in the sandlot, to the professionals who act like kids in gleeful victory. (I couldn’t resist showing my favourite Papelbon blown save!)

While these are great moments that can resonate strongly with any baseball fans, I think baseball emotion hits me so much harder than the average person simply because as a player I’ve lived through my own ups and downs throughout my baseball playing career.

Sure, I’ve never been paid a cent to play baseball and I’ve never played in front of thousands of screaming fans or in front of a national television audience, but baseball emotion exists at all levels of the game:

The champs! Your author is front row, centre.

After my peewee team’s dramatic walk-off win. Again, I’m front and centre celebrating with the winning hitter. I think I was first to run onto the field!

I could go on and on as I have many poignant baseball memories, but if I haven’t lost you already, I don’t want to lose you now.

While on the surface it may seem like simply a game, and perhaps a dull one at times, if you look closely enough you find out that baseball quite simply is a platform for an ongoing narrative of human drama.

Watch enough baseball and you’ll run the gamut of expeiencing every emotion from euphoria to sorrow, contentment to rage, overblown excitement to feelings of being complacent. Play the game as well and you might just be able to identify with those emotions all that much more as they unfold in front of you game to game, season to season.

There are only a few things worth giving full attention and efforts to in life and for me, baseball is one of them. Every moment I put into baseball as a player – every weight lifted, every ground ball taken, every batting practice pitch swung at – is in an effort to try to reach that next great memorable baseball emotion – good or bad. To me, that will always be worth it and when I lose that fire, it’s time to hang up the cleats.

Likewise as a fan, every game watched, every radio post-game show listened to, every news story read, is all made worth it for the continual great baseball emotions the game evokes in me and the pure bliss I know I’ll feel once the Jays get back to the playoffs.